NOTE: This article has been edited from a previous version. Theoretical physicists may have found the missing key to the workings of the universe: the Higgs boson, a subatomic particle thought responsible for giving mass to all particles in the universe. A group of 3,000 scientists around the world, including seven faculty members and several graduate students from the University of Toronto, have contributed to the research. They don't have enough evidence to declare it a discovery yet, but this is the closest the Higgs hunters have come to the particle in more than 40 years. But why is this important? Robert Orr, the founder of the U of T research team, explains in the following edited interview with the Star.

What is the Higgs boson?

If you go back to the very early universe, just before the Big Bang, particles didn't have any masses, according to our understanding. There was one very large force that all these particles interacted with. There was just a fireball.

As the universe cooled down, particles gained mass (by) interacting with the Higgs boson.

The reason you can't push a car ... is because of the mass of the particles in the car interacting with a Higgs field.

Why is finding and understanding this particle so important to physicists?

The Higgs boson particle is the missing piece in the Standard Model, a theory that explains electric forces, light and maybe even gravity. If it doesn't exist, the theory would have to be completely re-jigged.

And to regular people?

For the ordinary person, at least in this epoch of history, you get the satisfaction of knowing how matter works and how reality in some way is constructed.

How do you find this elusive particle?

(We've) collided billions of protons and looked at the systematic patterns in the debris and there is a hint, a hint that there might be something interesting there.

A hint that the Higgs boson particle exists?

Over the years we've narrowed down the region where it could be hiding. We need a bigger sample of data to be collected before we can be sure it does, indeed, exist.

When do you think you'll be sure?

You never can tell, but I would have thought by late next year we will be able to make a definitive statement that there is one chance in a million that we're wrong.

This research is being done in the Large Hadron Collider in Geneva. What is that? 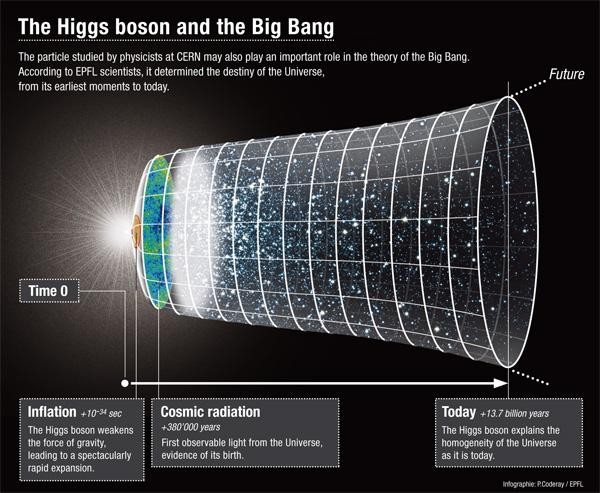 September 21, 2011 -Higgs Boson, the greatest riddle in all of physics, may hold the key to understanding the evolution of the universe from its birth, a group of physicists at Ecole Polytechnique Federale De Lausanne (EPFL) say. The race is still on for CERN scientists to identify the elusive Higgs Boson, which is considered the Holy Grail of particle physics. Scientists say this 'God' particle would also help to explain why the majority of elementary particles have mass, and that the universe wouldn't be the same without it.

Scientists say the Universe extends over billions of light-years and that it was incredibly tiny at its birth then rapidly grew. Physicists have added an inflationary phase to the Big Bang, an initial phenomenal expansion in which the Universe grew by a factor of 10^26 in a very short time.

Astrophysicists are measuring the state of the universe today by using data from the Planck satellite. They are observing the light echo from the Big Bang, which reveals the large scale properties of the cosmos.

However, they have a hard time accounting for this growth and believe that in its first moments, the universe was incredibly dense.

They ask why is it that under those conditions, why wouldn't gravity slow down its initial expansion?

Mikhail Shaposhnikov and his team from EPFL's Laboratory of Particle Physics and Cosmology believe Higgs Boson can explain the speed and magnitude of the expansion.

According to the team, in this infant Universe, the Higgs Boson, in a condensate phase, would have performed in a very special way, and by doing so it changed the laws of physics. The force of gravity, the physicist say, would've been reduced, and therefore, they can explain how the universe expanded at such a rapid rate.

"We have determined that when the Higgs condensate disappeared to make way for the particles that exist today, the equations permitted the existence of a new, massless particle, the dilaton," EPFL physicist Daniel Zenhäusern says via press release.

The physicists arrived at this conclusion by applying a mathematical principle known as scale invariance. Starting with the Higgs Boson, the physicists were able to determine the existence of the dilaton, which is a close cousin, as well as its properties.

They say this new, yet purely theoretical particle has the exact characteristics to explain the existence of dark energy. This particular energy offers explanation as to why the expansion of the current universe is once again accelerating, physicists say.

Physicists don't yet understand its origins, but they say this completely unexpected result means they are on to something.

If their theory so happens to be verified with data from the Planck satellite, it would clear up several questions about the Universe's, past and future, scientists say.

Back in July, physicists were excited when CERN scientists reported they glimpsed the Higgs Boson particle. Those signals have since faded, dashing the hopes of researchers who have long been trying to find the particle believed to give objects mass.

But researchers aren't prepared to give up, as they still believe they will either have found the particle by the end of next year or confirmed that it doesn't exist in the form proposed by the Standard Model.

"I think it has always been a possibility that the Higgs would not be there but I don't think we are ready to say that at this moment," said physicist Howard Gordon, deputy US ATLAS operations program manager.