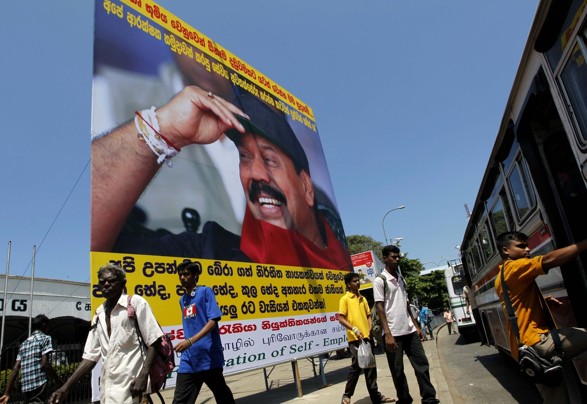 http://www.washingtonpost.com
UNITED NATIONS — Sri Lanka’s decisive 2008-09 military offensive against the country’s separatist Tamil Tigers may have resulted in the deaths of as many as 40,000 civilians, most of them victims of indiscriminate shelling by Sri Lankan forces, according to a U.N. panel established by Secretary General Ban Ki-moon. The panel recommended that Ban set up an “independent international mechanism” to carry out a more thorough probe into “credible” allegations of war crimes and crimes against humanity by the Sri Lankan government and the Liberation Tigers of the Tamil Eelam (LTTE), which held more than 300,000 civilians “hostage” to enforce a “strategic human buffer between themselves and the advancing Sri Lankan army.” Extensive portions of the report were published over the past several days by a Sri Lankan newspaper, the Island, and have been quickly repudiated by Sri Lankan authorities. U.N. officials confirmed the authenticity of the report but said the disclosure was incomplete. They said Thursday that the release of the report had been delayed amid discussions with Sri Lanka over the possibility of including a rebuttal in the report.

The panel’s findings constituted a devastating indictment of the country’s military conduct during the final stage of the 28-year war, accusing government forces of shelling hospitals, no-fire zones and U.N. facilities, and blocking the delivery of humanitarian aid to victims of the war. The panel calls on Sri Lanka to “issue a public acknowledgment of its role in and responsibility for extensive civilian casualties in the final stages of the war.”

But investigators also faulted the United Nations for failing “to take actions that might have protected civilians” and called on Ban to conduct a “comprehensive review” of the U.N. system’s response to the crisis.

The Sri Lankan government launched an all-out offensive in 2008 in an effort to crush the Tamil Tigers, one of the world’s most violent and ruthless insurgencies. The operation, which centered on a Tamil stronghold in the Vanni region of Sri Lanka, succeeded in wiping out the armed movement in May 2009. But the operation took a devastating toll on ethnic Tamil civilians, who were largely trapped between the rival forces.

“This campaign constituted persecution of the population of Vanni,” according to panel member and University of Michigan legal scholar Steven Ratner. “Around 330,000 civilians were trapped in an ever-decreasing area, fleeing the shelling but kept hostage by the LTTE. . . . From February 2009 onwards, the LTTE started point-blank shooting of civilians who attempted to escape the conflict zone, significantly adding to the deal toll in the final stages of the war.”

The Sri Lankan government challenged the report’s finding as “fundamentally flawed.” In a statement, the country’s Foreign Ministry said the “report is based on patently biased material, which is presented without any verification.”

Sri Lankan Foreign Minister G.L. Peiris urged Ban not to publish the report, saying it could undercut efforts to promote reconciliation between the ruling Sinhalese and the Tamils. “The publication of this report will cause irreparable damage to the reconciliation efforts of Sri Lanka,” he told reporters, according to the Agence France-Presse news agency. “It will damage the U.N. system too.”

After the war, Sri Lanka established an eight-member commission to address abuses during the last seven years of the civil war and recommend ways to avoid a recurrence. The U.N. panel said that the commission “represents a potentially useful opportunity to begin a national dialogue on the Sri Lanka conflict” but that “it has not conducted genuine truth seeking about what happened in the final stages of the armed conflict