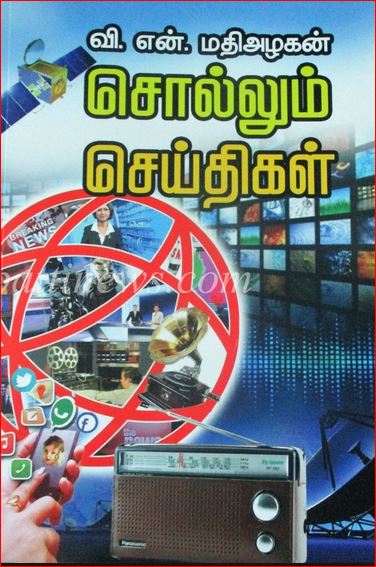 From the humble beginnings as an Operational Assistant (spinning discs and assisting in production of programmes) in the studios of Radio Ceylon, V N MathiAlagan gained practical and theoretical aspects of electronic broadcasting, step by step, and rose to the highest position as Deputy Director General of Broadcasting. He is a humble and pleasant man with dedication to his chosen field with immense talents and shone over the airways as the first Thamil newsreader over the first TV station in Lanka the ITN, and later the Rupavahini and proving himself as an efficient administrator in radio broadcasting too.

At the beginning of the present century he emigrated to Canada and presently work for the TVI Channel (Tamil Vision Inc.) as a Senior Broadcaster.

He was in Lanka last week to launch his worthwhile book of 150 pages titled “V N. MathiAlagan- Sollum Seithigal” (meaning the NEWS (he) SAYS)

The book is priced at Rs 1000 and printed by Kaanthalaham in Chennai.

SriLankan Radio (then called Radio Ceylon and later SLBC) was and is very popular broadcasting medium in South Asia for its friendliness shown by broadcasters in different tongues-English, Thamil, Sinhala, Hindi, Malayaalam, Telugu and Kannada.

But now, sad to say, with the number of private radio TV stations coming up, the focus is on cheap entertainment and catering mostly to the not so culturally inclined younger people. The electronic media is e flooded with broadcasters descending to lower standards, thereby insulting the majority of listeners and viewers who expect information and cultivated cultural items. The audience expect that the broadcasters should play a role model to the listening and viewing public. The accepted standards of using the medium of language deteriorated, and young people not properly understanding the nature of radio/tv broadcasting enter the field using clichés and inappropriate ‘ad lib bing’, lowered the standards of speech over these channels.

But not all broadcasters are to be blamed for the misuse of broadcasting etiquette.

It is at this point, that this book in Thamil serves the good purpose of educating the etiquette in broadcasting, particularly in radio / tv journalism and the quintessence of good broadcasting.

The author acknowledges the pioneer TV personalities, the late Thevis Guruge, and Sharmini Boyle by using their colour photographs in the back of the front cover and dedicates the book to his wife, who is the woman behind his success. There are 15 chapters plus comments by others in the form of introductions and forewords and wishes.

In his well-written pieces in clear language, he primarily stresses on the language of the spoken word and news presentation. Simple language is rightly recommended by him. He also mentions the collective responsibility in gathering news and rendering them. He also writes about the current methods of News communication in the electronic media. He cautions of how correct pronunciation matters, behind the news, perfect translation into native languages, newsroom studios among other things

Let me list some of the points which may be useful to all broadcasters and newscasters.

Credibility, accuracy, clarity, translating ability, maintaining a balance in presentation, nonpartisan attitude, immediacy, voice -production, avoidance of overcrowding of words and complex sentences, and the like.

He also gives valuable advices and suggestions and hints particularly to those print and electronic journalists using the Thamil language, who are willing to learn.

There is yet another chapter on the importance of correct pronunciation of Thamil and other languages words.

The need for updating and following up of news by journalists, understanding the scenes behind the news, correct translations from one language to the other and many more information clearly explained by the veteran V N MathiAlagan.

It is a superb guide to all journalists who could read Thamil.

In the inside pages one finds several memorable photographs in which the author has figured prominently. Undoubtedly V N Mathia lagan is a proud product of our country, even though he is a Canadian citizen now.

As a previous regular broadcaster in English and Thamil, I wish to congratulate the author for producing a valuable book.